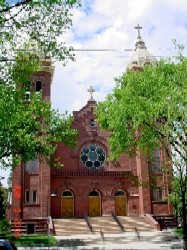 Tall bronze-topped bell towers have led people to the church since it was built in 1909. The building style is largely Romanesque (note the rounded arches of the windows and doors, and the barrel vaults of the nave), but the bell tower cupolas are influenced more by German Renaissance style, exhibiting asymmetric octagons with slimmer corner sections. The cupolas are characteristic of bell towers common to the Alpine regions of Europe.
Source: “St. Michael’s Church: A Guided Tour”, pamphlet, by Theodore Pedeliski

The next meeting is Tuesday, May 10 at 6:30 p.m. in City Hall Rm A102. Members of the Historic Preservation Commission may be attending in person or virtually.